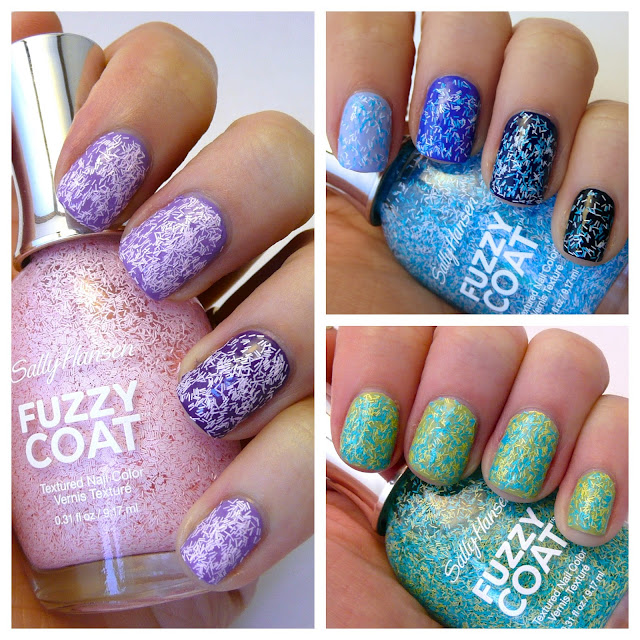 It's Arden!  A couple of weeks ago I was strolling through Target (which my boyfriend calls my "happy place") and I spotted this new Sally Hansen display:

I was instantly drawn to the fuzzy coats!  Each fuzzy coat is composed of a clear base with one or two different colors of rectangular glitter.  After weighing my options VERY carefully (read: for a very long time), I ended up picking out these three shades: 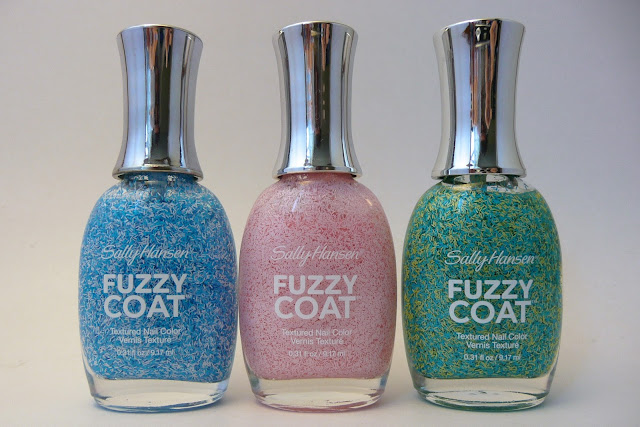 In the bottle, Fuzz-Sea was my favorite, so I started swatching it first.  I first painted on two coats of Essie Navigate Her, and then applied two coats of Fuzz-Sea on top. 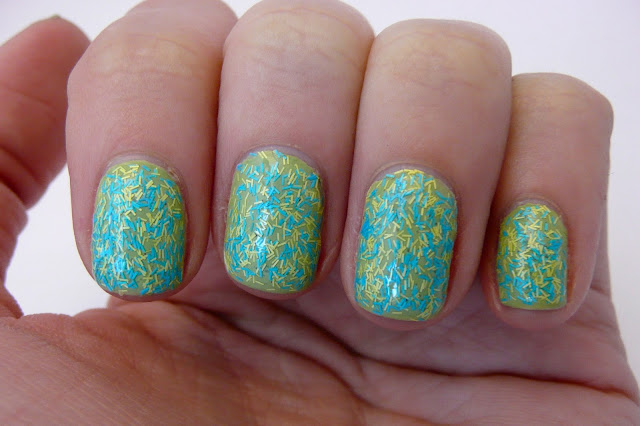 In the bottle, I thought Fuzz-Sea was going to be a green and yellow glitter, but actually it's blue and yellow.  From far away it looks pretty green, but up close you can definitely tell that it's individual pieces of blue and yellow.  I'm not gonna lie, I didn't like it as much as I thought I would. 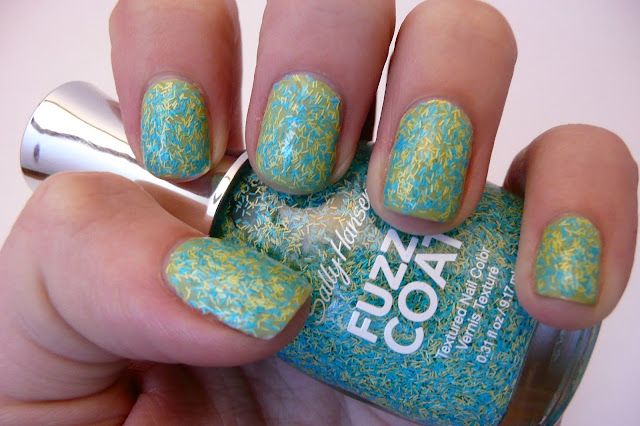 Next, I tried the pale pink Wool Lite.  This one is composed of just pale pink glitter. For this one, I decided to apply it over two different shades of purple: L'Oreal Royalty Reinvented and Zoya Mira (on the accent nail). 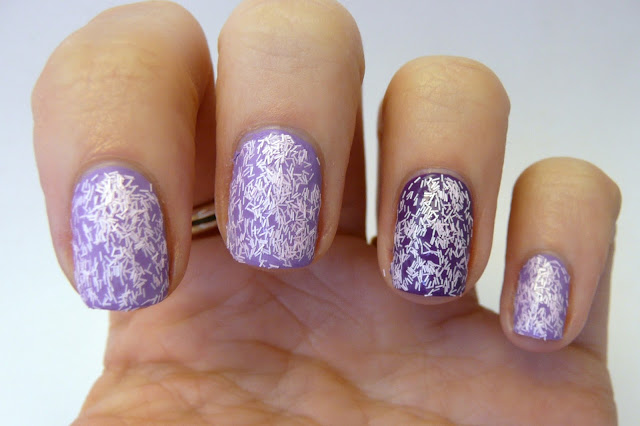 I used two coats of Wool Lite in these pictures, but I think that one coat or three might have been better.  The two coats looks a little cluttered, but not enough to seem totally opaque.   I need to try it on top of a pink next time and see how it looks! 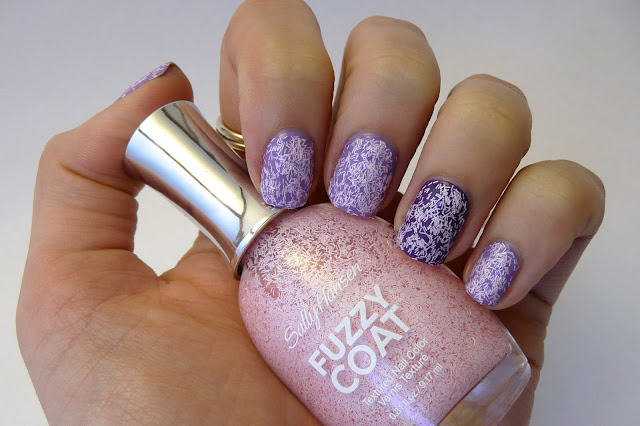 Finally, I tried out Wool Knot and it ended up being my favorite of the bunch!  It's has both blue and white glitter.  I think that gives it a little more dimensionality than Wool Lite.  I tried it out on top of a bunch of different shades of blue polish: 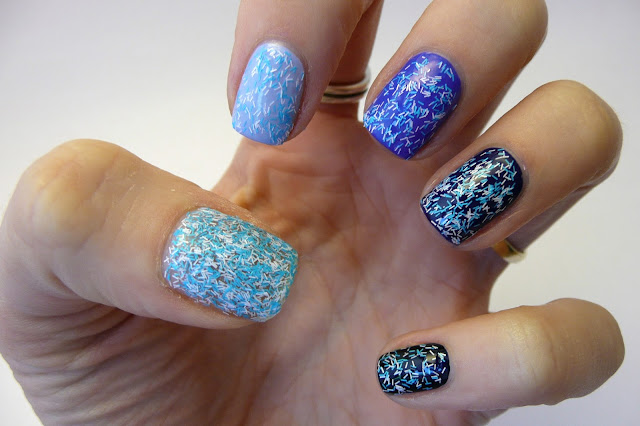 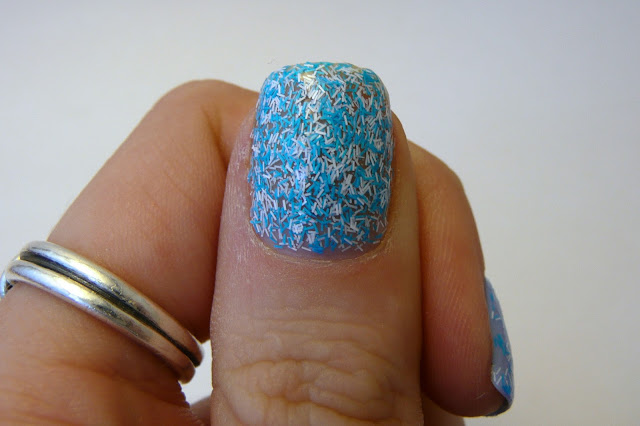 On the rest of my fingers, I used just one coat of Wool Knot on top of blue base colors, and I REALLY like the way this looked.  This will probably be how I wear them in the future!

Of the four blue shades I used, my favorite is my ring finger (Wool Knot over Sapphire Siren).  That color combination matches exactly my high school's school colors.  If anyone's reading from Centennial High School in Franklin, TN, go run by Target, grab Sally Hansen Wool Knot and Maybelline Color Show Sapphire Siren, and you're ready to go for spirit week in the fall! 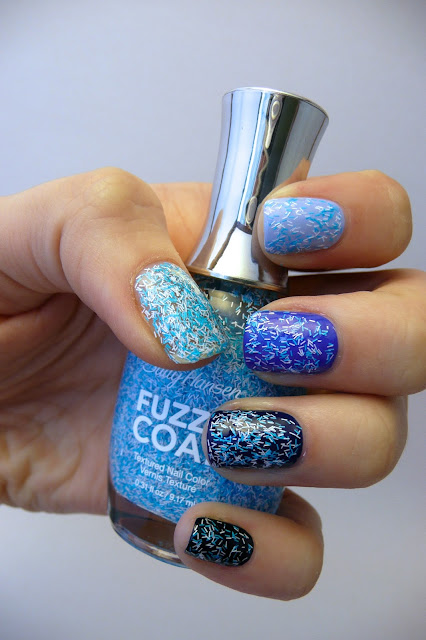 Final verdict: These Sally Hansen fuzzy coats were really great.  They apply pretty easily, considering that they're solid glitter.  I initially thought I'd have to dab them on to get enough glitter, but they actually brush on really easily.  They aren't perfect, and are really difficult to wear just by themselves, but look pretty cool over another color.  And at $5.49 apiece, they're much cheaper than most of the unique glitter polishes you find out there.

Have you tried out any of the new Sally Hansen fuzzy coats?  Let us know!
Posted by Arden at 12:46 PM