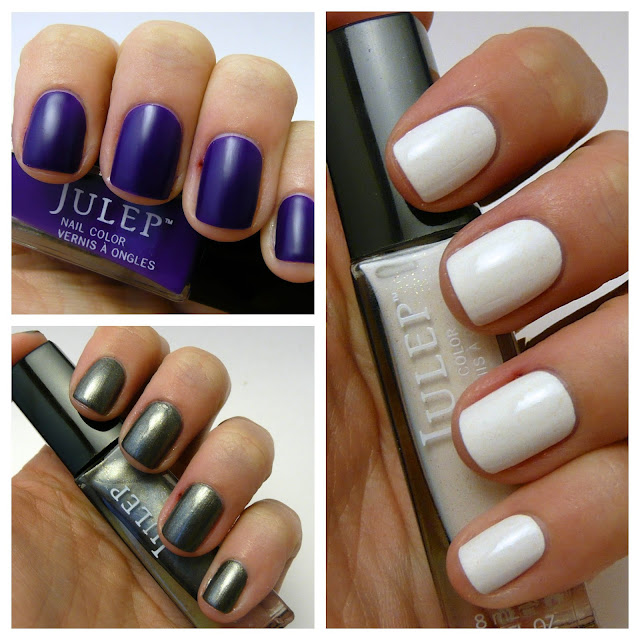 Arden: As you may remember, a couple of months ago we ordered a Julep Mystery Box to try out some Julep polishes.  We were really pleased with both the quality of Julep polishes and how great a value the mystery box was, so I decided to sign up for Julep's monthly Maven box program.

Here's the deal with the Julep Maven program: you sign up, take a style quiz, and they send you an introductory box.  Then, every month they email you what'll be in each box and you get to choose which one you want, or if you want to skip that month.  I really like that they have the skip option-- it makes me feel like I'm not locked in foreverrrrr to pay for a box; I only get it when I want it!  (There's also an option to pay for it but send it to a friend, which seems like an awesome birthday gift option!)

Full disclosure: when I signed up, I really wasn't expecting to continue my subscription.  I thought I'd get the intro box, see how I liked it, and then probably unsubscribe.  BUT, then I happened to see a post on Julep's Facebook page looking for people to test some of their new products in Palo Alto.  I responded and got to go try out some very early prototype ideas at this design firm in Palo Alto that Julep had contracted to develop new products.  It was fun, and while I was there I got to meet a lot of the top leadership at Julep, including the founder Jane Pak and the COO Kate MacDonald.  I was super impressed with Julep's leadership and how engaged they were in hearing our opinions.  In short, they were good people, and I now feel great about giving them my business.

If you're interested in signing up, click here or input this referral code in when you order: 21712460 (I get reward points if someone uses my code).

And now, after that looooong preamble, here are some swatches of the three colors I got in my "It Girl" Introductory Box: Stefani, Eden, and Bunny.

First up is Stefani, which the Julep website describes as a "gold flecked grey metallic" nail polish. 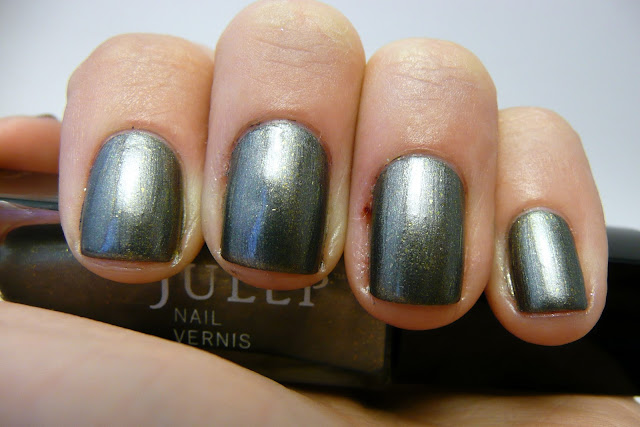 This is two coats without a top coat.  I ended up liking this polish A LOT more on the nail than I did in the bottle.  In the bottle it looked a little too much like dirty sand, but on my nails I thought it was a lot more metallic and fun. 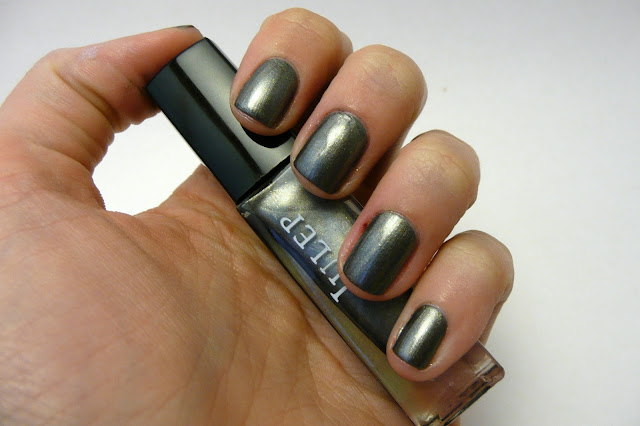 Next up is Eden, a "bright violet creme." 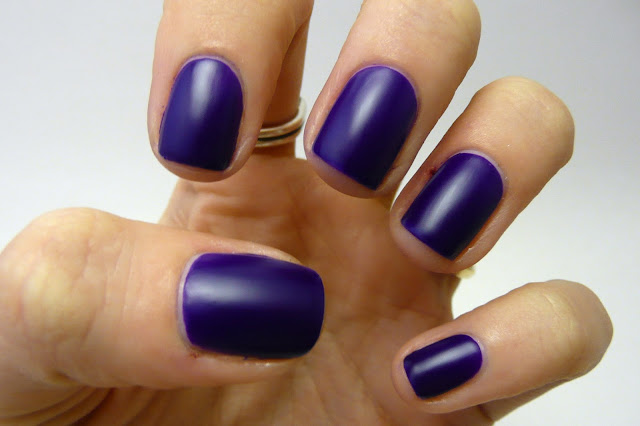 Again, this is two coats with no top coat.  Oh my goodness, you guys, this polish.  It is SO purple and wonderful.  I can't get enough of it.  As you can see, it's slightly more matte than most regular polishes, but a coat of top coat can fix that right up.  This is definitely my favorite of the polishes from this box, and I've already used it in several manicures! 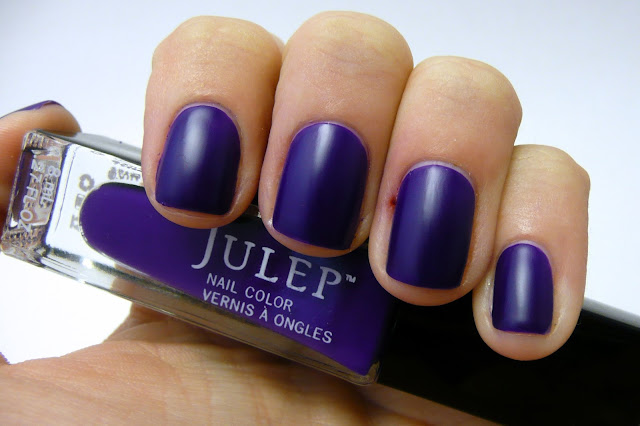 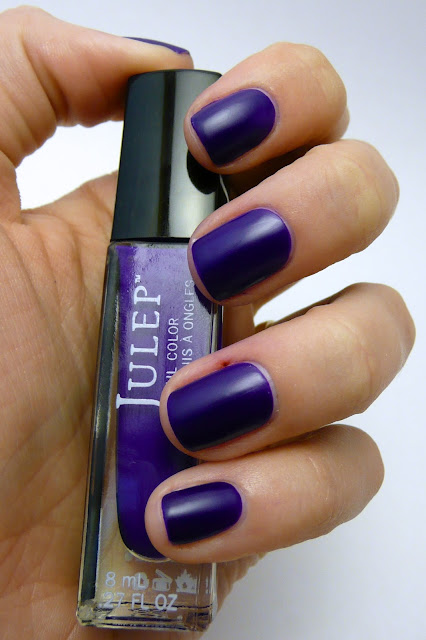 And finally, Bunny, which is supposedly a "crisp white linen with fine gold shimmer." 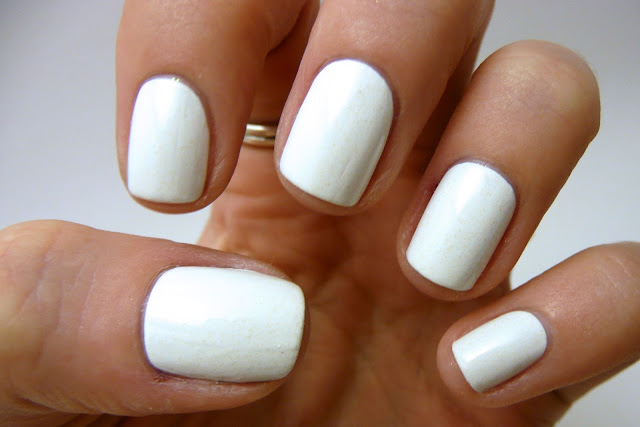 In the bottle, this polish looks AWESOME.  It's very visibly white with small gold sparkles.  Unfortunately, on the nail it just looks white.  And not even really white.  Like some kind of not-quite-white that's a little mottled in a way that's hard to describe.  It's a bit of a bummer.

Here's a clear pic of the bottle so you can see the gold shimmer: 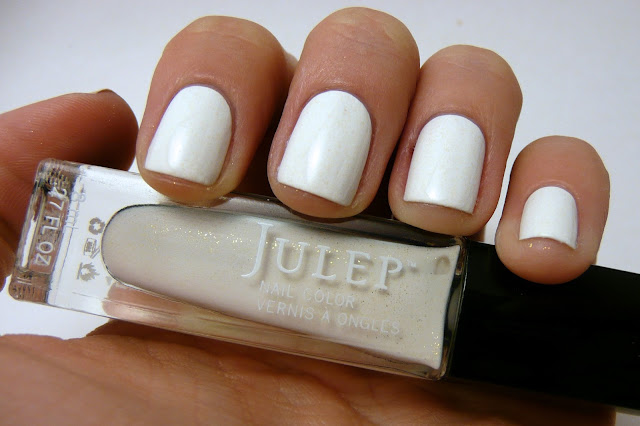 Julep sells a bunch of white polishes, but I would probably not recommend this one.  I mean, it's fine, it's just nothing special.

And that's a wrap!  Look forward to a couple more Julep posts in the future (especially since my August box is supposed to come today and I've been not-so-patiently staring at the mailbox for hours!)