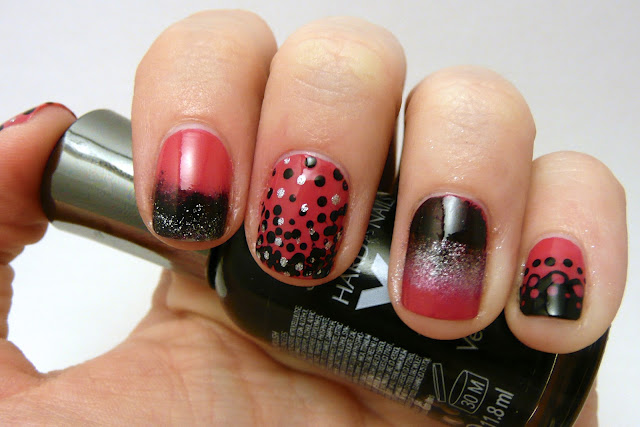 Arden here!  Recently, I've been not-so-subtly trying to convince all of my engaged friends to let me play around with their wedding colors and create some possible bridal/bridesmaid nails for them.  (My boss says I should start my own business after I get ordained called "Nails & Nuptials" where I not only provide wedding nail art, but also officiate the wedding.  I secretly think this would be an AWESOME career decision.)

The first person to actually take me up on it was my friend Krystal.  Full disclosure: Krystal didn't actually tell me her colors so I could come up w/ nail designs.  Her fiance mentioned their wedding colors while we were playing trivia one night, and I ran with it.  But I told Krystal what I was up to, so I'm not tooooo much of a stalker.

Krystal's colors are pink and black (plus a little bit of silver as an accent), which are super fun colors to create nail designs with.  I had a bunch of ideas, so I ended up doing something different on every nail. 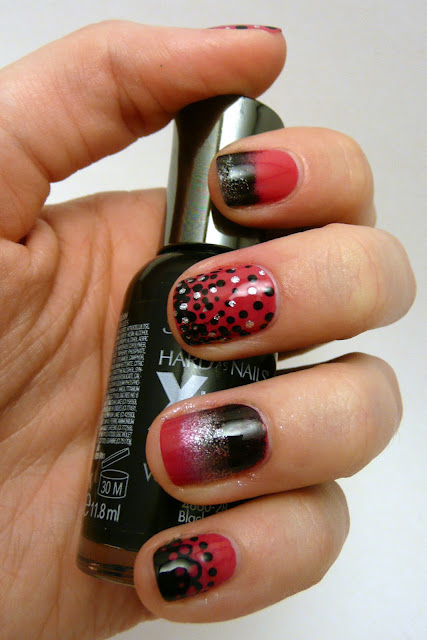 I started with two coats of China Glaze Make an Entrance on each finger.  Then I added the following embellishments:

Thumb: Polka dots!  I used both ends of my dotting tool to make larger black polka dots as well as smaller silver dots in a uniform pattern

Pointer finger: Sponged some black on about a third of the nail at the tip, and then sponged on Storm at the very tip.

Middle finger: More dots!  Made a dot gradient (tutorial here) by using my smallest dotting tool in black, and then added some small silver dots on top of that.

Ring finger: Just a simple gradient using the pink, silver, and black polishes.  Our gradient tutorial can be found here.

Pinky: Finally, a lace-like pattern made using dots.  I started my taping off the bottom half of my finger and painting the tip black.  Then I made some black dots along the edge of that line, so it was now a scalloped edge.  Then I added pink dots on top of that, followed by some smaller black dots opposite.  A similar pattern can be found here. 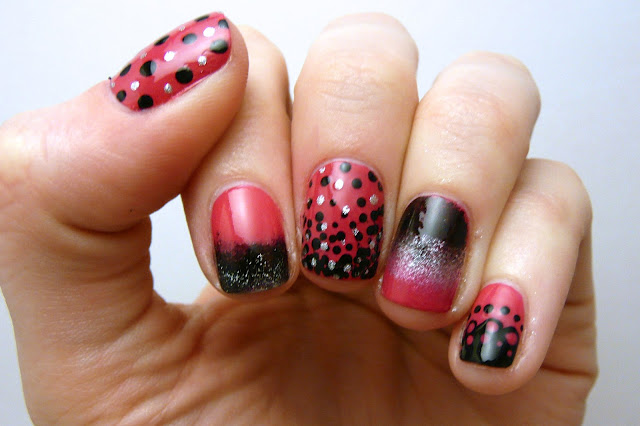 If you've got a wedding coming up, feel free to steal any of the above designs!  Or leave me a comment telling me your wedding colors and I can work on some designs for you as well!

I've also been working on some bride-specific nail designs, so look for those next week!
Posted by Arden at 5:55 PM