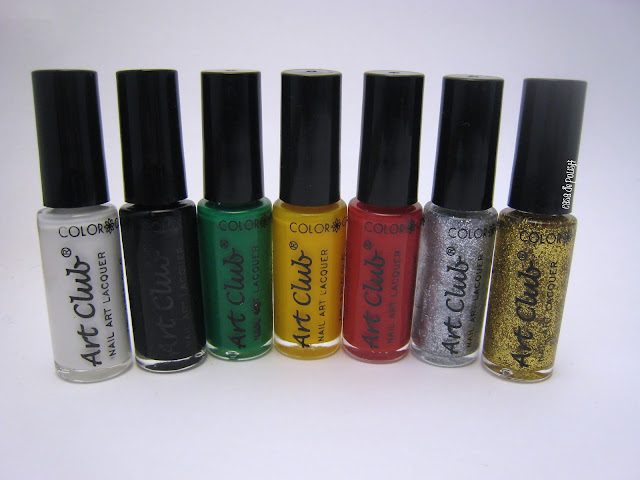 So a while ago, we found out on the internet that stores like Marshalls, and Ross and K-Mart sell nice nail polish for cheap.  So, never one to pass up a deal, Arden intrepidly went on a scouting trip and called me to say that this set of striper polishes from Color Club/Art Club was being sold for $9.00.  I've never tried any striper polishes, plus it seemed like a good deal so I decided to test it out!

I started out with a manicure inspired by a mug Arden gave me for Galentine's Day, my favorite holiday of the year.  For the uninitiated, Galentine's day is the day before Valentines day and it's the day we celebrate our female friendships! 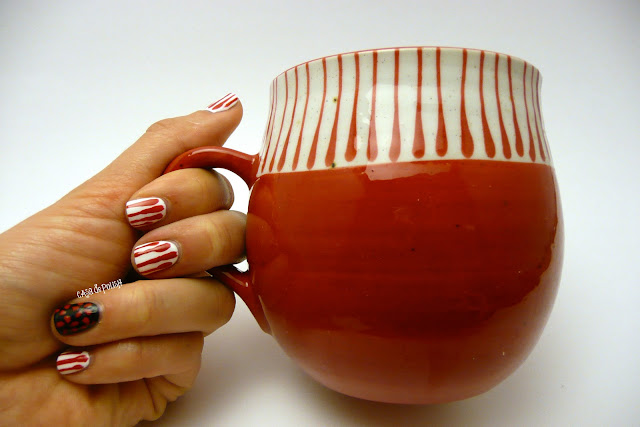 I LOVE this mug and the stripers made it very easy to emulate.  I let nail polish pool and the end of the brush for a little bit then pulled it out towards the tip.  For the flowers on the accent nail, I made little dabs with the tip.  It doesn't really match the rest of the manicure, but I still love how it turned out and want to try it again.

I'm showing "one coat" of red (these didn't have names) here. 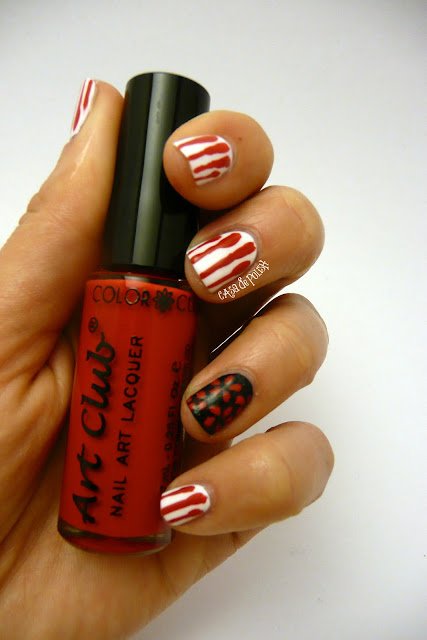 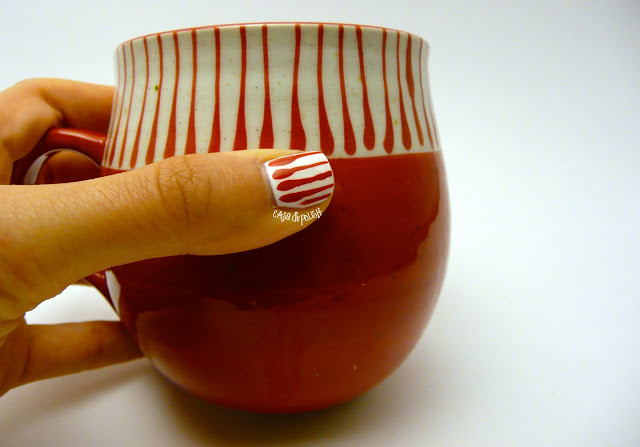 Overall the stripers were easy to use (especially after my back-of-the-box practice session) though I think I left the tops of a couple of them not screwed up all the way, because the red and white got a little thick.  For all of them, the polish striper brushes would get a little goopy from time to time, so I would periodically swish them around in some acetone to clean them up.

For the green polish I tried out some animal print, zebra and "giraffe."  Giraffe is in quotes because I didn't bother to look up what giraffe print actually looks like before painting it, and apparently my memory of it is pretty shoddyy.  So let's call it "geometric blob print" instead. 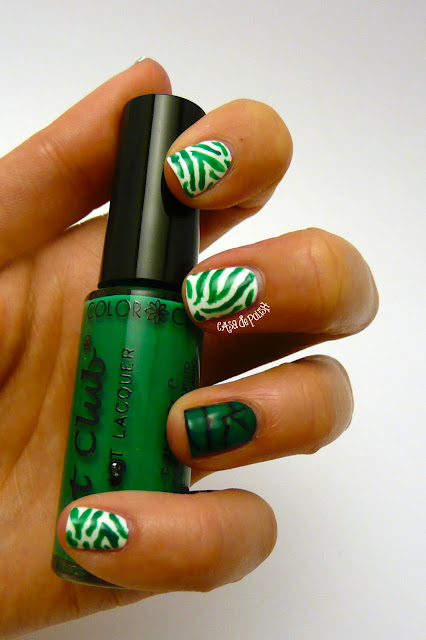 I used two "coats" of green for these, meaning I painted the stripes once and then sort of went over them again.  It helped with the opacity and also helped make them a little more zebra-y, because they were a little raggedy around the edges, in like a good way. 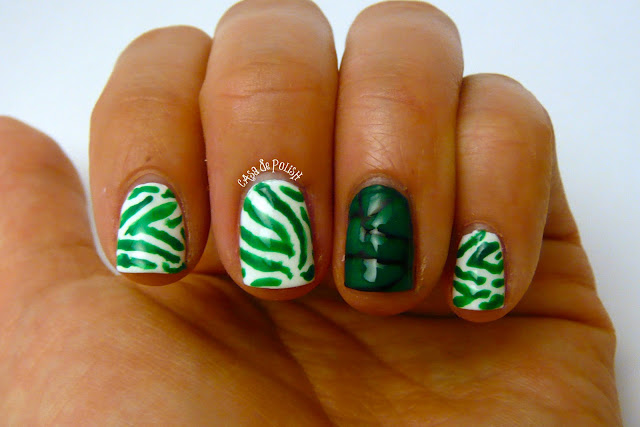 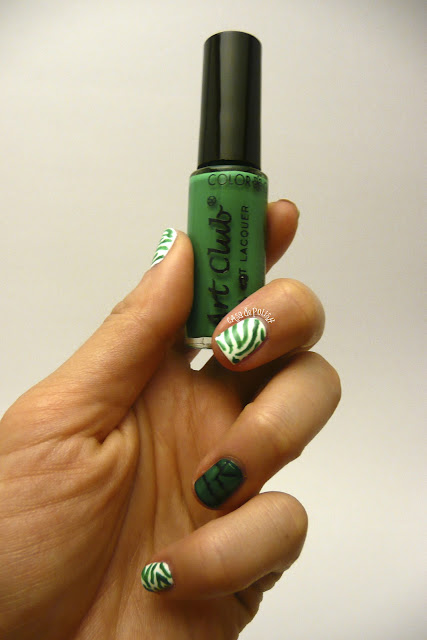 This next manicure was my favorite of the batch.  It was super simple, but I think it looked great and it was easy to do with my non-dominant hand as well, so I did a full manicure and kept it on for a few days.  It made me VERY happy. I did a single coat of black striper for these, and kind of laid the striper brush flat across my nail, which helped keep the lines steadier. 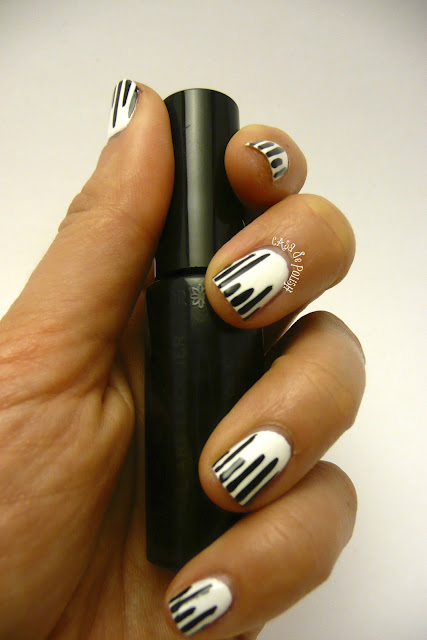 By the time I got to the yellow striper, I was starting to struggle a bit to come up with good patterns. So this is a vertical squiggly line? Plus an L on my accent nail.  For Lisl. You know, my name. (Creative right?) 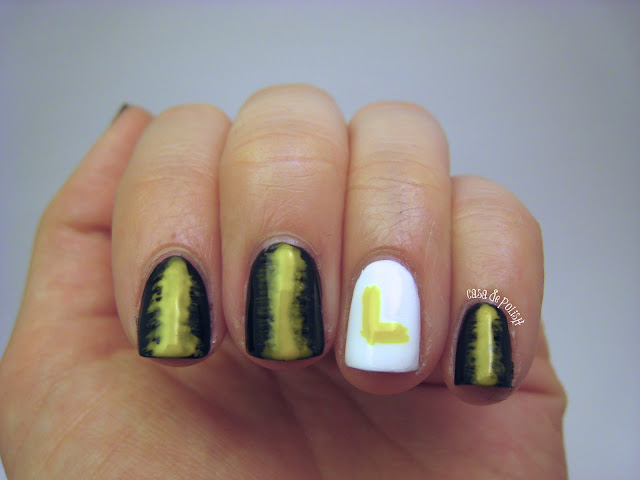 I used two coats of yellow for these.  For some reason they remind me of the Eye of Sauron.  But  not for any, like, sensical reason. 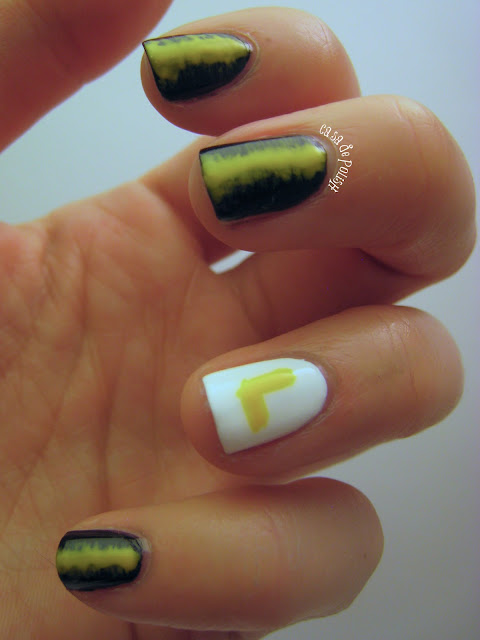 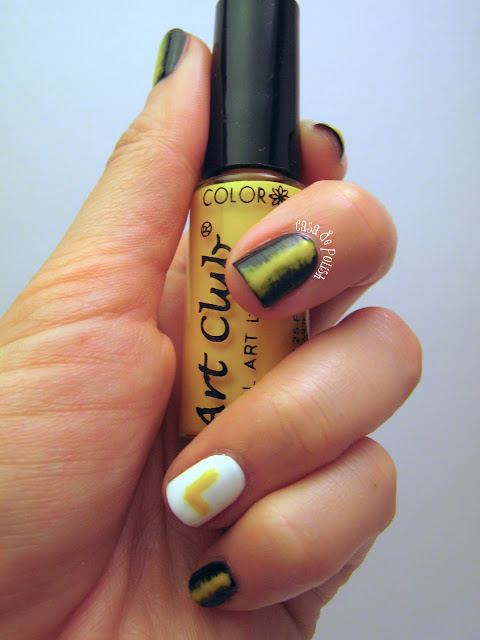 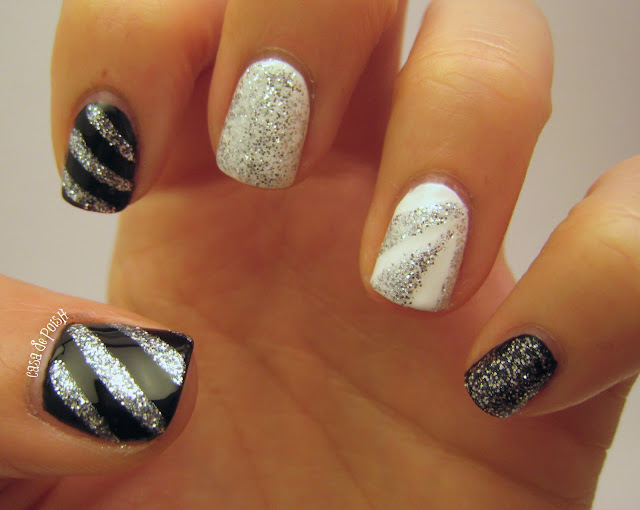 It's hard to see in these pictures, but I thought I caught a glint of holo in the silver.  It was just some pretty color-sparkle tucked in between the main silver glitters.  I also tried two nails where I just tried to use it as a glitter topper.  It wasn't as easy to apply evenly as a typical glitter topper, not surprisingly since that's not what they're for, but I think it did alright. 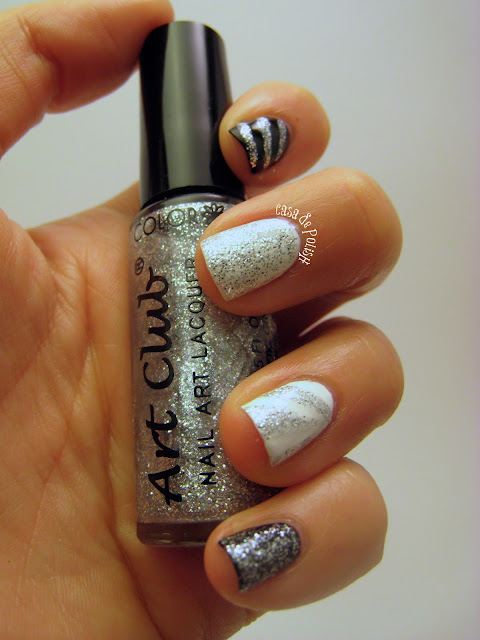 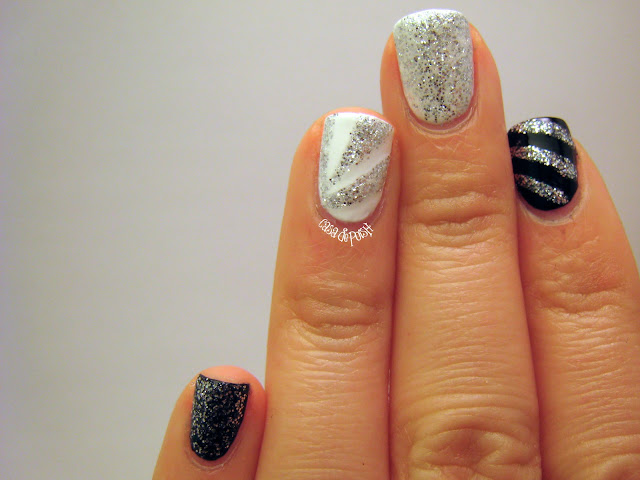 I used a similar strategy with the gold, but tried dots instead of stripes.  It's hard to get the dots of a consistent size, but it was good for randomly distributed dots and the flowers on the thumb. 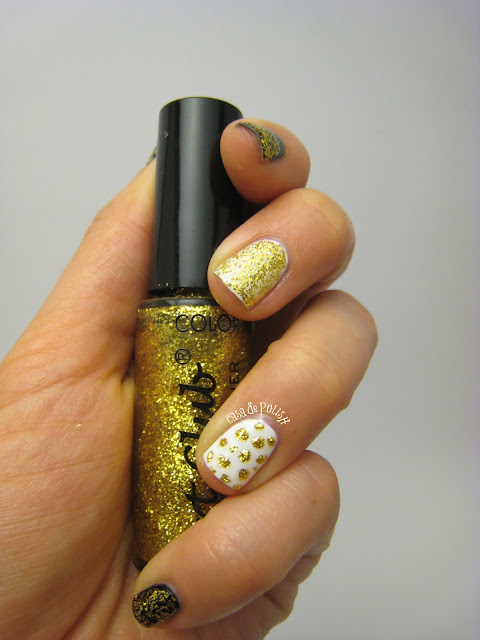 I also tried to do a "gradient" on my pointer finger,  I didn't do a very good job, but I think they would work really well for this with a little bit of practice.  Everything shown is a single coat and or "dab," so you can see how dense the glitter is. 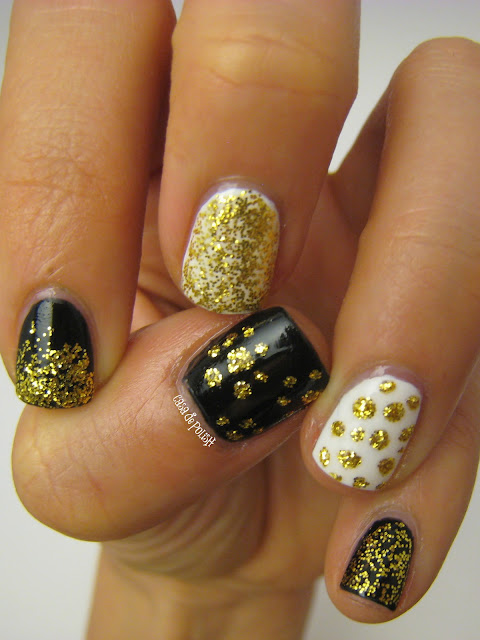 For the last manicure, I used the white striper over black, and pulled out everything I had in my pattern arsenal.  The original plan was to do a checked pattern, like on my thumb, but then I didn't like it that much so I tried some other things: paisley, clouds, triangles, and whatever that thing is on my pinky finger.  Half of a wagon wheel, I guess! 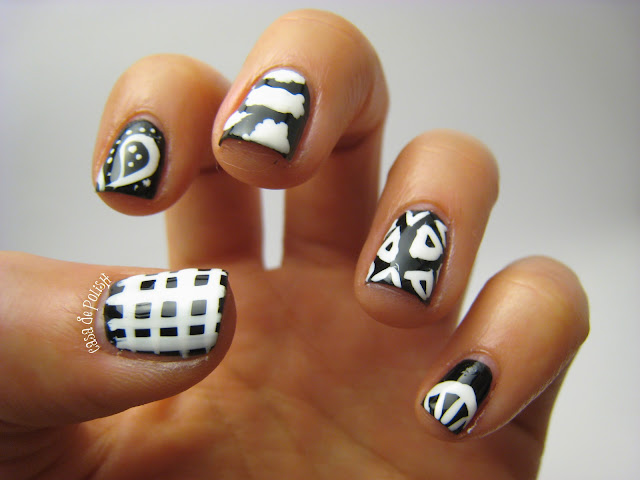 I had the most trouble with this one.  The white had gotten a little goopy, and the brush was sort of uneven and stringy at the end, so it was hard to get clean lines.  Still, it went on very opaque so that was good. 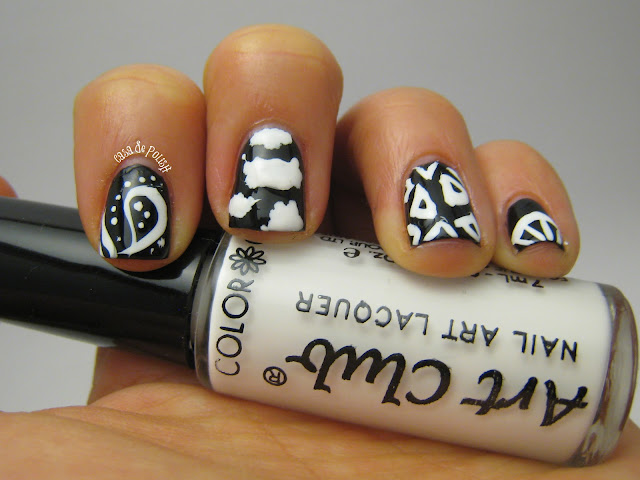 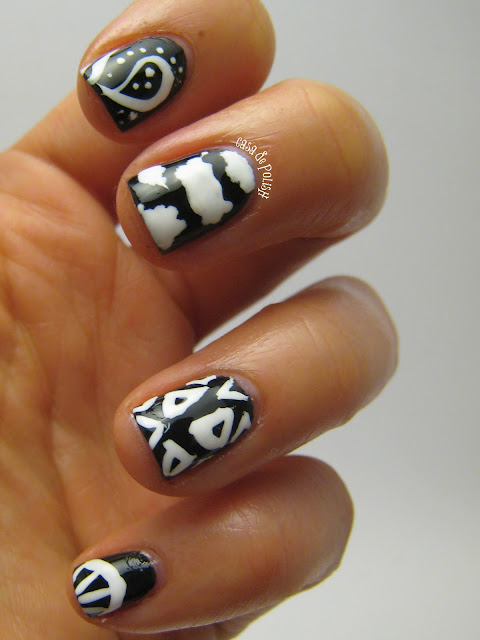 And that's it! I had a great time with these, and can't wait to play with them some more. They'd be great for some leopard print manis, and lots and lots of florals.  I'd definitely recommend picking up a set, especially if you can find them on sale!