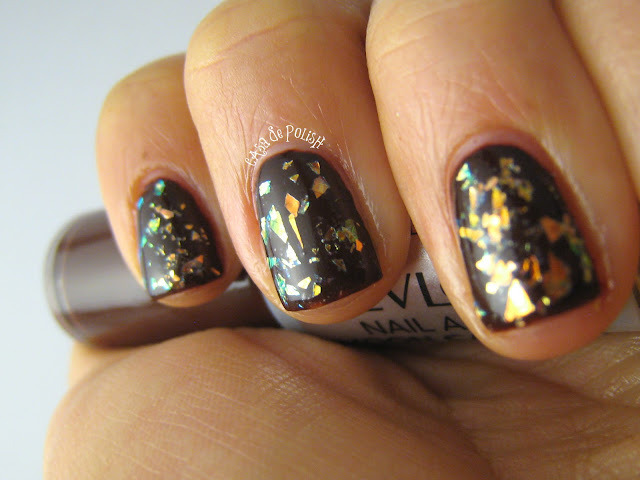 Arden: I don't know about you, but it seems like for the last month or two I haven't been able to walk into a drugstore without stopping by a display like this (and only partly because Emma Stone seems like one super cool lady):
Now, the Neon nail art duos don't seem that interesting to me (they're just a white polish and a neon polish-- I'm fairly certain I could duplicate that effect myself using my own white and neon).  The Nail Art Expressionist brushes seemed pretty neat, but what I was really attracted to was the Revlon Nail Art Moon Candy.

Now, I am a bit of a sci-fi nerd, so it's possible the interstellar name attracted me, but I also thought that idea of pairing polish with a matching flakie polish.  But for a while there, they're $9 price tag was too steep for me.  But then I was able to grab one at Rite Aid for 40% off, and later was able to snag one for Lisl and one of the Expressionist duos (stay tuned for that one!) on a buy one get one sale at CVS, plus a $1 off manufacturer's coupon. (It's possible we might be a little too proud of our deals here at the Casa de Polish.)


The set I bought was Revlon Nail Art Moon Candy in "Galactic."  It comes with a dark navy creme polish and a blue-green flakie polish.  Here's the navy without the flakie top coat: 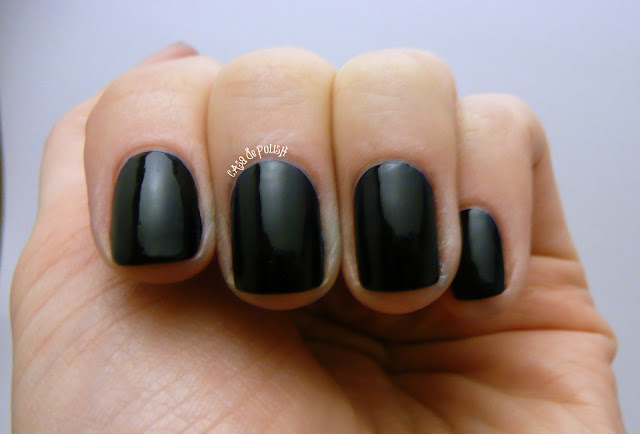 As you can tell, it is a VERY dark blue.  And yes, it basically comes across as black.  I imagine if I'd painted my nails white and put one coat of this blue over it it might look navy, but if you just put on two coats of this polish, it's gonna seem black.  This has been my experience with other dark navy polishes (for example, Chanel's Blue Satin), and this polish is no different.

Here it is with the flakie top coat: 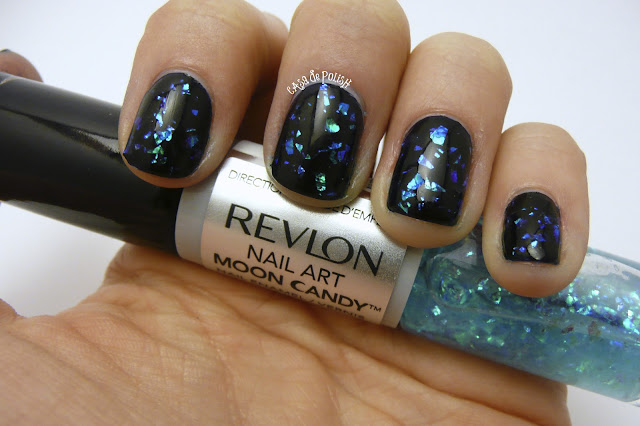 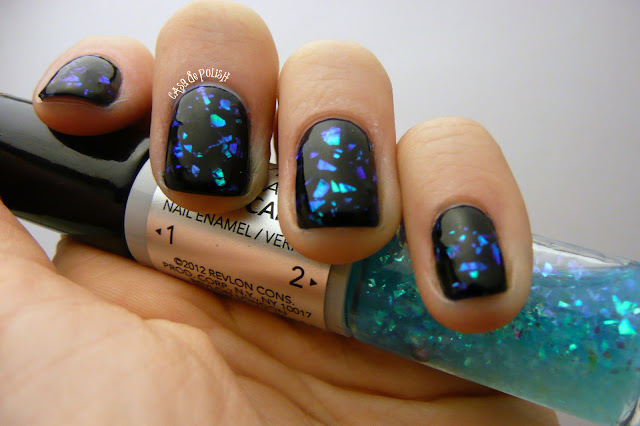 And here's one so you can see how much it sparkles in the sunlight: 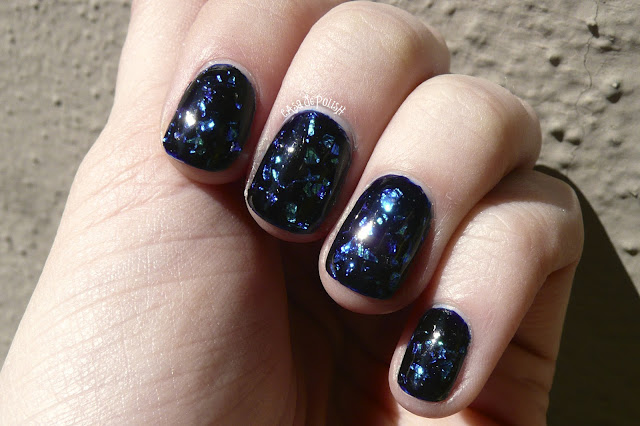 I think the blue-green flakes are really pretty (and make the nail polish itself seem slightly more blue), but that polish really did not apply terribly easily.  It was nearly impossible to brush it on (as you would normal polish), I had to entirely rely on the dabble method (Lisl note - you did a much better application job than me, yours are way more evenly distributed).  (If you're not familiar with the dabble method, please watch this video.  It's life-changing.  Go ahead, I'll wait.)

Also, the flakes did not sit smoothly on my nails.  They were pretty jagged and rough; most of that was solved with a top coat, but there were still some jagged edges on my nails.  Overall, I was really pleased with how they looked, but I imagine there are probably some better flakie polishes out there on the market.  I'd say Revlon Moon Candy is worth a spin, but only if you can get them on sale!

I had Arden pick me up some Moon Candy in "Universe."  (Out of context, that sentence would be way crazy).  I'll start with the base color.  It was a maroon-ish brown creme, a little redder and lighter than it is coming across in these pictures.  I'm showing it here with three coats, though two would be more than fine.  The reason I had three is because I had huge application problem.  I am confidence that this is totally user error, because I have this problem with a lot of Revlon polishes and Arden has used the exact same ones without error.

Basically, I can either apply them with super streaky thin, or thicker smoother coats that instantly bubble up. Bubbles bubbles everywhere.  So I started out with two thin streaky coats, then layered on a thicker one quickly (because I got frustrated), threw on some Seche Vite and snapped as many pictures as I could before the bubbles started rearing their uggly bubbly heads.

Again, Arden never has these problems, it's definitely all me.  =( 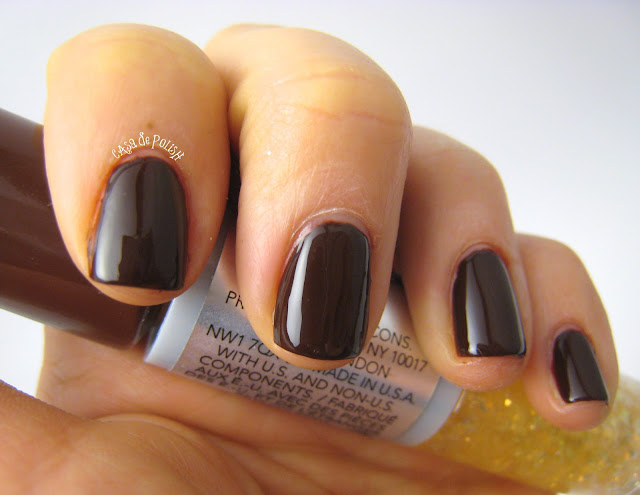 Then, I applied my flakie topper, with a lot of the same difficulties as Arden, but despite the flakie wrangling I still thought it was quite pretty. 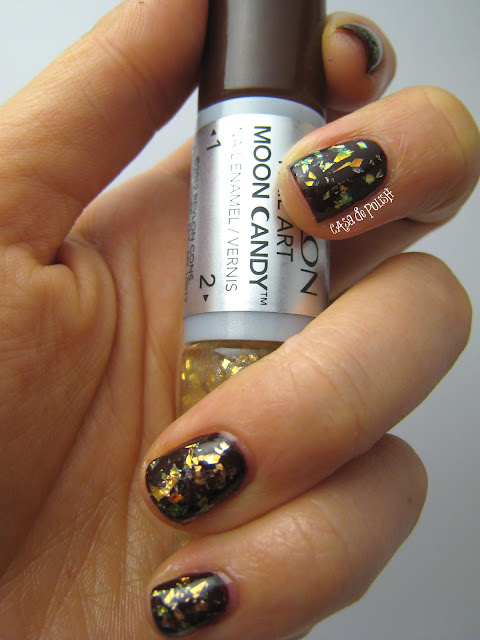 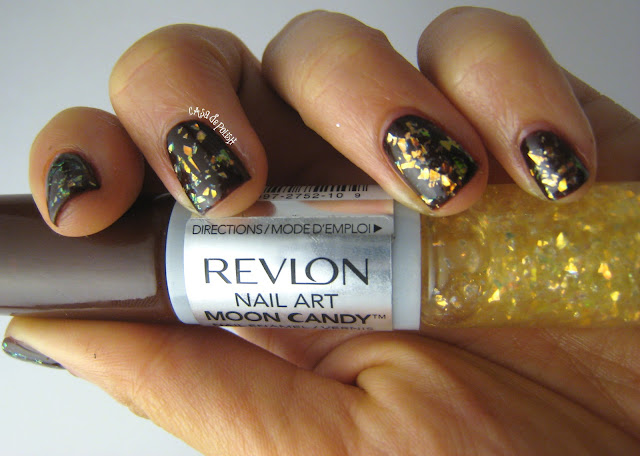 I tried to take pictures from different angles, so you could see the gold shift to copper and green.  You can see a little in these how thick the final product was, with 3 coats of base, Seche Vite, one thick coat of flakie, more Seche Vite... 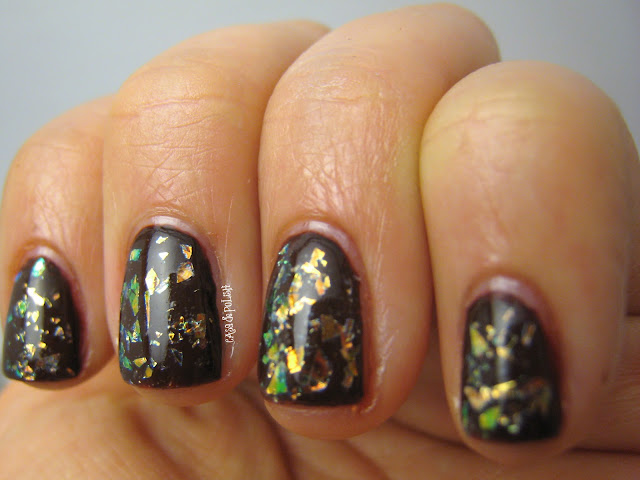 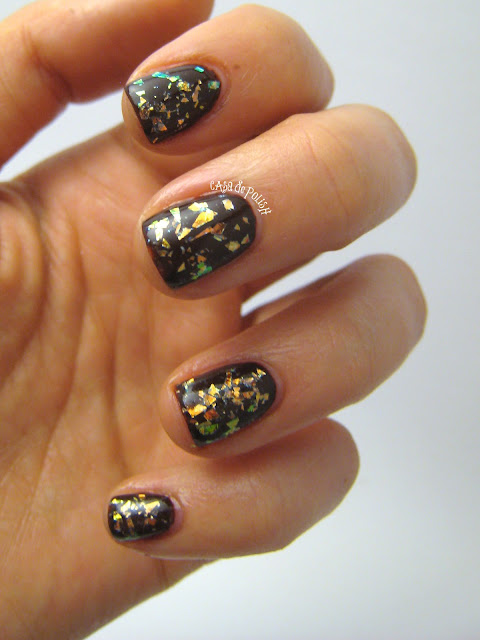 Overall, I think with some practiced application, you'll get really pretty results with Moon Candy.  But, if there is a better flakie in the colors that you want, I'd go for that one.